The World Innovation Summit for Education (WISE) is an annual meeting which considers matters relating to global education. Founded in 2009 by the Qatar Foundation, WISE's annual convention is currently taking place in Doha. Official projects take place over several days in November each year. During this time, ministers and decision-makers, major organisations and associations in the field of education, research and culture, along with representatives from the academic world, experts and delegates from major companies involved in this field all gather together — a total of a 1,000 people represent 120 countries and 5 international organisations.

In 2013, a global selection process took place over a period of several months. More than 500 projects were assessed. At the end of a stringent selection process, the "2013 Wise Award" was awarded to Medersat.com in recognition of its "outstanding quality" and innovation in language teaching (Arabic (available shortly), Amazigh, French and Mandarin).
In a statement to the Summit organisers, the President of Fondation BMCE Bank for Education and the Environment, Dr Leila Mezian Benjelloun, said she felt "justifiably proud of the Foundation's actions over nearly 14 years developing a structure for educational innovation and an educational model that benefits children in Morocco's rural communities."These developments are a consequence of the pioneering partnership between the Ministry of National Education and other national and foreign institutions.

Dr Leila Mezian Benjelloun pointed out that in setting up its Medersat.com project, the Foundation has made a concerted effort to work on the quality of pre-school and primary education. The Foundation's aim is to develop an innovative educational and pedagogical project that enables the school to teach, socialise and prepare pupils for a successful academic career and to promote clear equality of opportunity. The overall approach is to develop pupils into active, responsible and welcoming citizens within their communities and the world. It is also to instil values of tolerance, openness, modernity, respect for the environment, pacifism and democracy.
The Merdersat.com model for schools is now a reference for educational and social proximity criteria. It's recognised as being a new addition to the community schools network. 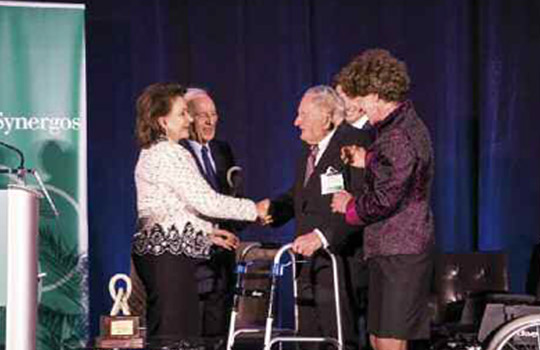 The award is a tribute to the work of Fondation BMCE Bank, created in 1995, and to the "Medersat.Com" project, which it has been developing for more than 15 years. The ceremony was attended by a great number of American and international personalities from the world of politics, philanthropy and business.

Mr. and Mrs. Benjelloun's names were added to the list of recipients of this prestigious award, which has been previously awarded to former Heads of State Bill Clinton and his wife Hillary Clinton and to Nelson Mandela. It has also been awarded to global entrepreneurs and philanthropists such as Bill and Melinda Gates, Richard Branson, Ratan Tata, SA Karim Aga Khan and to Michael Bloomberg.

During this tribute event in honour of Mr. and Mrs. Benjelloun, the audience was shown a short 10-minute film. The film describes Medersat.Com's educational project principle achievements and was shown in the presence of its producer, Miss Dounia Benjelloun, Chief Executive of Dounia Productions and of Mr. Brahim Benjelloun-Touimi, Director of the Fondation BMCE Bank.