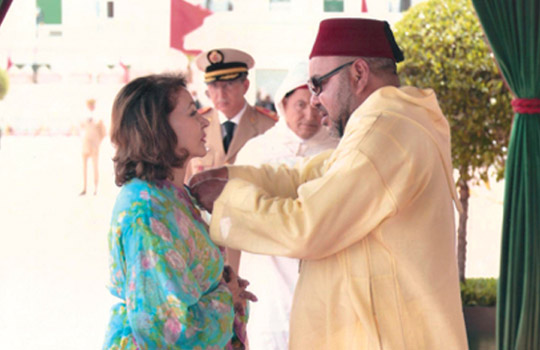 During celebrations on July 30 2016 of the 17 th anniversary of the investiture of HM King Mohammed VI, may God glorify him, HM presented the Wissam Alawite of Al Arch Officer Class citation to Dr. Leïla Mezian Benjelloun, President of Fondation BMCE Bank for Education and the Environment.

This Royal Citation honours 20 years of Dr. Leïla Mezian Benjelloun's commitment to education and her efforts to secure the future of generations to come. To believe in the future is to allow access for all — access to sustainable progress. It represents putting education first.
With this in mind, Fondation BMCE Bank is committed to environmental protection, human development and the promotion of the nation's culture.
The Foundation was created in 1995. Dr. Leïla Mezian Benjelloun started the Medersat.com Project in 1997. It aims to create community schooling in support of literacy — illiteracy is an obstacle to any country's development at the beginning of the third millennium.
Medersat.com schools are creating new pathways to success for the most deprived children and aims to place languages at the heart of learning along with mother tongue and international languages and includes the recent introduction of teaching Mandarin.
Consequently, as each new academic year starts, a network of optimism and growth takes shape via efforts to stimulate progress towards achievement and environmental protection.

The Medersat.com networking project has now been extended to sub-Saharan African countries and supports BMCE Bank of Africa Group's social responsibility commitments in relation to activity on the African continent. This venture is commendable because of the project’s inventiveness and resource handling and has received worldwide praise. It has produced a stream of corroborations and acknowledgements from the President of the Fondation BMCE Bank for Education and the Environment.